This article presents the demo prepared by SoMLabs for the VisionSOM-8MM Android system. The source code is freely available on the github repository: https://github.com/SoMLabs/imx_android_visionsom_8mm_demo_app. In the Android system image for SoMLabs modules this application is available by default, as stated in this tutorial: VisionSOM imx-android. In the image, this application is built as the system app.

The application's GUI contains two buttons for enabling and disabling on-board LEDs, VideoView widget and a slider changing the text displayed on the label below. It was written in the Java language using the Android Studio IDE. 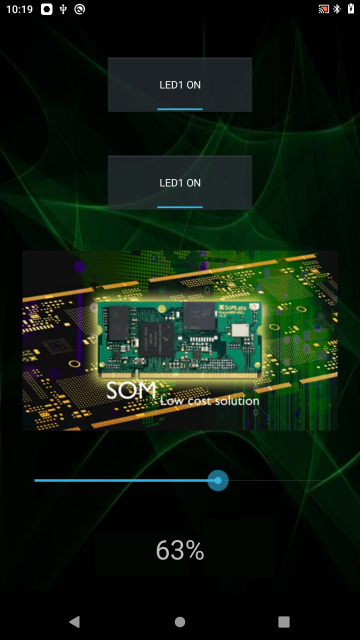 For the purpose of controlling LEDs in the device configuration files a new security domain was added (led_control). It has access to the two LEDs brightness files defined in the sepolicy: